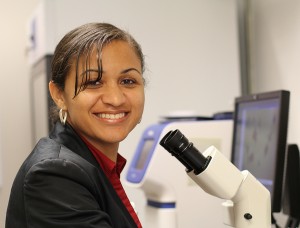 Senta Georgia—principal investigator at Children’s Hospital Los Angeles (CHLA), and assistant professor of pediatrics, and stem cell biology and regenerative medicine at USC—has a creative idea for helping children with a genetic form of diabetes and malabsorptive diarrhea called enteric anendocrinosis. And through its Discovery Inception program, the California Institute for Regenerative Medicine (CIRM) has put forth $180,000 to turn her idea into meaningful progress towards new stem cell-based treatments.

“We asked scientists to pitch us their best new ideas, things they want to test but that are hard to get funding for,” said C. Randal Mills, president and CEO of CIRM, the California agency charged with dispensing $3 billion in voter-approved dollars to stem cell researchers throughout the state. “We know not all of these will pan out, but those that do succeed have the potential to advance our understanding of stem cells and hopefully lead to treatments in the future.”

To better understand this disease, Georgia and her colleagues will focus their studies on a young CHLA patient who has enteric anendocrinosis due to a mutation in a gene called NEUROGENIN3 (NEUROG3).

“Similar to other patients with enteric anendocrinosis, this child developed diabetes at the age of four,” said Georgia. “This suggests that NEUROG3 is not required for an embryo to develop beta cells initially, but is required for beta cells to function and survive after birth. This contradicts previous studies of how NEUROG3 works in mouse models and underscores the importance of understanding the way genes affect disease in the human context.”

In order to study this patient’s beta cells in a minimally invasive way, the researchers will rely on sophisticated stem cell technology. Using the Chang Stem Cell Engineering Facility, the researchers will reprogram the patient’s skin cells into induced pluripotent stem cells (iPSCs). Georgia’s team will use these iPSCs to generate beta cells with the patient’s unique genetics, including the NEUROG3 mutation.

They will then apply genome editing to correct the NEUROG 3 mutation in hopes that it will improve the beta cells’ survival and function. If these edited beta cells continue to thrive when transplanted into a diabetic mouse, this will be the first step towards developing a cell replacement therapy for this patient.

Senta Georgia is a member of the Theta Mu Omega chapter.