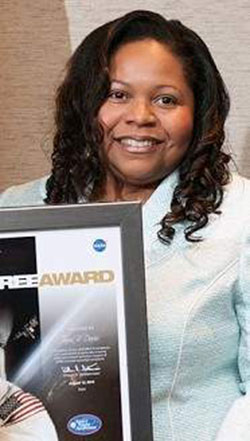 Tania Butler Davis was honored with a National Aeronautics and Space Administration (NASA) Space Flight Awareness Award for her work at Johnson Space Center. The award was presented in New Orleans on August 12, 2015, in recognition of Davis’s accomplishments at NASA in her role as lead procurement analyst. In this position, she develops procurement strategies, selects key procurement milestones for headquarters review, reviews draft and final solicitations and provides guidance for critical acquisitions. Davis obtained a bachelor’s degree in biology from NCCU in 1994 and a master’s in business administration from Johns Hopkins University in 2000.