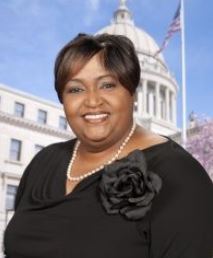 REP. SONYA BARNES, In 2011 ran and won Mississippi District 119. She started her term in January 2012 and was assigned to the following committees as state legislator: Tourism; Gaming; Ports, Harbors, and Airports; Conservation and Water Resources; and Marine Resources. In addition, the Speaker of the House chose Sonya to serve as a Mississippi delegate at the National Conference of State Legislators. The state Democratic Party also chose her to serve as the official spokesperson for Medicaid Expansion for the upcoming legislative session, an honor not often held by freshman legislators.